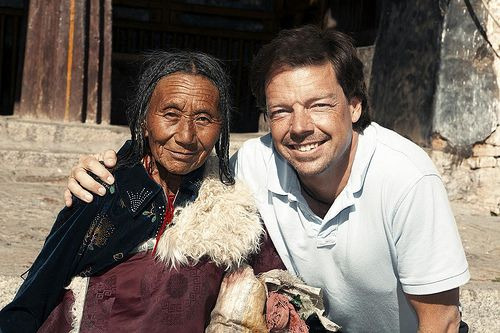 Yours truly with a grandmother on a pilgrimage from Amdo (Northeast Tibet) at Sera Temple. Many people have asked me how I get so many portraits?…do I ask permission first? Well, I usually make eye contact, say hello (tashi delek) and smile. If the person looks like they don’t want to be photographed, I generally show them my camera and the pictures I’ve taken earlier that day. Almost without fail, they want a photo, too. As many people are traveling with extended families, the rest of the family inevitably wants to see the picture. That usually causes a bit of a mob scene where everyone wants in on the action…culminating in a large group photo of the family! Fortunately, I’ve brought along a Polaroid printer to give then copies. So, I’ve been able to go from a resounding “no” to official family photographer in less than 5 minutes!